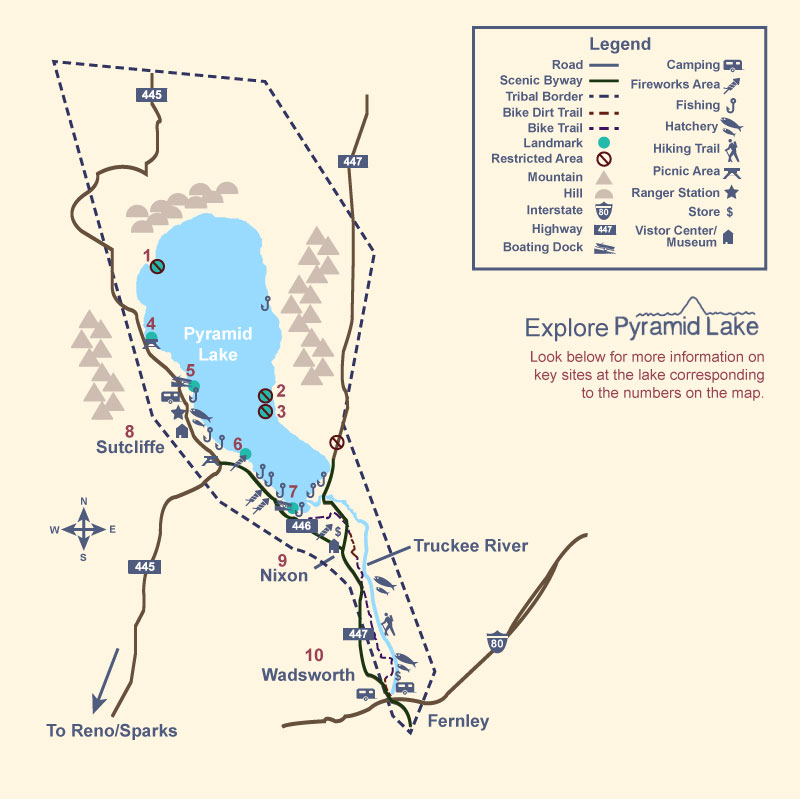 The Needles, a series of tall tufa towers, has a hot spring once popular with bathers. To protect the cultural resources of this scenic area is it closed to public access by vehicle and boat.

This large pyramid shaped tufa island rises 353 feet above the surface of Pyramid Lake to an elevation of 4,153 feet. It was formed underwater between 13,000 and 26,000 years ago through the precipitation of calcium carbonate where springs met with lake water. To protect the cultural resources of this scenic area is it closed to public access by vehicle and boat.

The Great Stone Mother is a remarkable tufa rock formation that resembles a hooded Indian woman seated with an open basket lying next to her. To protect the cultural resources of this scenic area is it closed to public access by vehicle and boat.

This is a popular picnic area with a shallow beach. There is good fishing on the south end of Thunderbolt Bay.

This is the best boating access on the lake. There is a concrete boat ramp with two docks, vaulted outhouses and hard sand beach access for most vehicles. This is a popular camping spot year around.

There is a good shoreline drop off on the point. This is four-wheel drive only due to soft sand.

This is the main boat launching facility on the south shore. Popcorn has one dock and an improved vaulted restroom.This is also a popular shore fishing area with good dropoff for casting to deep water. Be cautious here driving due to soft sand.

The Lake Operations Facility (Lake Ops) is located in Sutcliffe, NV on the western shore of Pyramid Lake. Lake Ops also serves the important function of spawning Lahontan cutthroat trout (LCT) for each year’s production. Lake operations, constructed in 1980, is primarily an acclimation facility. Sutcliffe is also home to the Dunn Hatchery, named after Peter Dunn, a tribal member who lost his life during the early phases of the program. Hatchery construction commenced in 1974 and fish production was initiated in 1975.

Visitors of Pyramid Lake can learn more about its fascinating history and its native inhabitants, the Paiute Indian tribe, at the Pyramid Lake Paiute Tribe Museum and Visitors Center. Nixon is also the center for the Tribal Government.

Wadsworth is the first town on the reservation off the Interstate 80. Wadsworth is home to camping, the I-80 Smokeshop, and the Big Bend Hatchery, which is used to hatch out cui-ui eggs which are released into the Truckee River to drift back to Pyramid Lake.

Your Permit to Pyramid